…big changes in vocal rhythm from one verse to the next.

It’s always a nice touch when a song uses slightly different lyrics from one chorus to the next… I feel like I’m getting about one dollar more songness out of the song. For example:

But let’s face it, changing “plunder” to “chunder” is hardly a full day’s work. What really impresses me is when a song noticably changes the melody from one verse or chorus to the next, and not just in an improv/let-it-loose/singer-didn’t-really-learn-the-song way. In an on-purpose way.

Of course the criteria for “on purpose” are subjective, but I’m going to use the following criteria to determine whether Some Cool Thing that happens in the vocal line is intentional:

So for starters, using criterion #1 (melody and harmony change the rhythm together), Tommy James and the Shondells make a super-cool vocal shift in the last chorus of “I Think We’re Alone Now”… the first two times through the chorus, the downbeat lands on “one”, as in “there doesn’t seem to be any ONE a rah-hound”. But the last time through, the downbeat lands on “be”, as in “there doesn’t seem to BE anyone around”. In a doctorofrock.com first (and maybe last, this took f’ing forever, how does anyone score music?), here’s what that looks like in score form:

And the last chorus:

Obviously intentional, and easily overlooked, but super-cool. In fact it’s more awesome because it’s so easily overlooked, it’s like “I have this great idea that probably no one will notice but that’s how confident I am in my songwritingsmanship”.

In any case, it’s clear that what you’re all wondering is “did Tiffany do this also?” Sadly, no, she did not. Poop and bah-humbug on the Tiffany version.

The first chorus of the Tiffany version:

The last chorus of the Tiffany version:

However, I am going to give the Tiffany version credit for one other consistent, nearly irrelevant, but probably intentional change:

She gets a little grit going and just has to change that one gritty note on TUM-ble.

And – last point on “I Think We’re Alone Now” – I want to call out the solo in the Tiffany version. If you asked me what instrument is playing this solo, the best answer is clearly “the ’80s”. Yes, if the ’80s were an instrument, this is what it would sound like:

OK, moving on, lest this become an entire blog post about a song where the inflatable Gumby was the least ’80s aspect of the video: 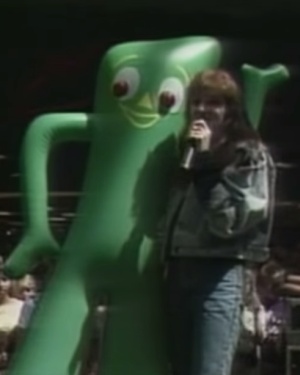 In another early-rock-and-roll-song-notably-covered-in-the-’80s example, I alluded in a previous post that I would be highlighting awesome rhythm changes in the melody of Earth Angel. In this case, I think a different singer handles the second bridge, and completely shifts the downbeat throughout the whole bridge (criterion #2 above): 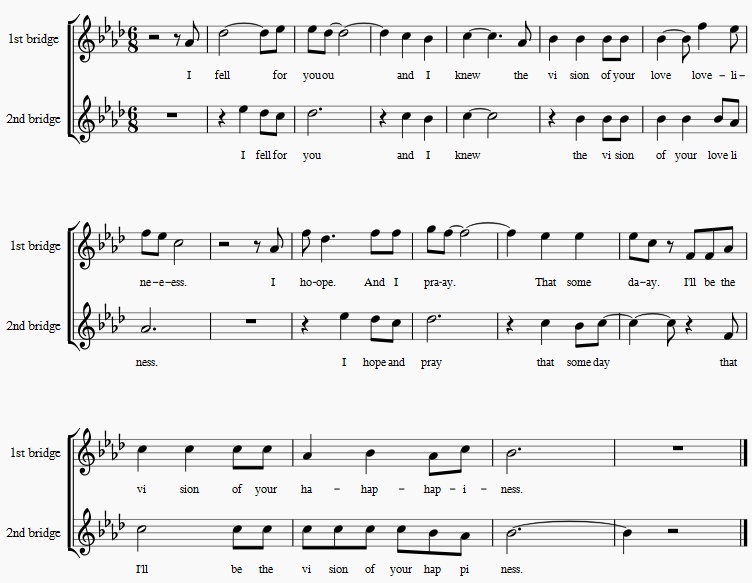 Again, audio for each, then the two put together so you can hear the changes. Here’s the first bridge of the Penguins’ version:

And the second bridge:

This could have been unintentional re-interpretation by different singers. But does it satisfy criterion #3 (cover versions do The Thing)? Come on, you know you’re wondering whether Marvin Berry and the Starlighters also made this rhythm change… as luck would have it, you can’t tell in the movie (if you don’t know what “the movie” is, you need to get yourself a time machine), because George McFly makes his move during this section, and an orchestral score briefly takes over (go ahead, you know you want to watch the whole thing, this blog will still be here):

But don't fret! The soundtrack version reveals that Marvin Berry does in fact switch up the rhythm, in a way that's more or less faithful to the original.

The first bridge in the Marvin Berry and the Starlighters version:

He doesn't quite stick with the downbeat shift quite as consistently as the original, but hits it on the first and last phrases, so I'm certifying this cover as "more attentive to detail than Tiffany was".

Example 3: Only the Good Die Young

Last example in my wildly verbose effort to convince you that changing rhythms is certifiably awesome. This one will be shifted forward by about 30 years, so the original is in the '90s and the notable covers are in the 20-somethings.

In Billy Joel's "Only The Good Die Young", the first verse repeats as the last verse... OR DOES IT?. In fact, when it repeats, the downbeat has moved, by virtue of sticking another "come out" at the beginning of "come out Virginia, don't let me wait": 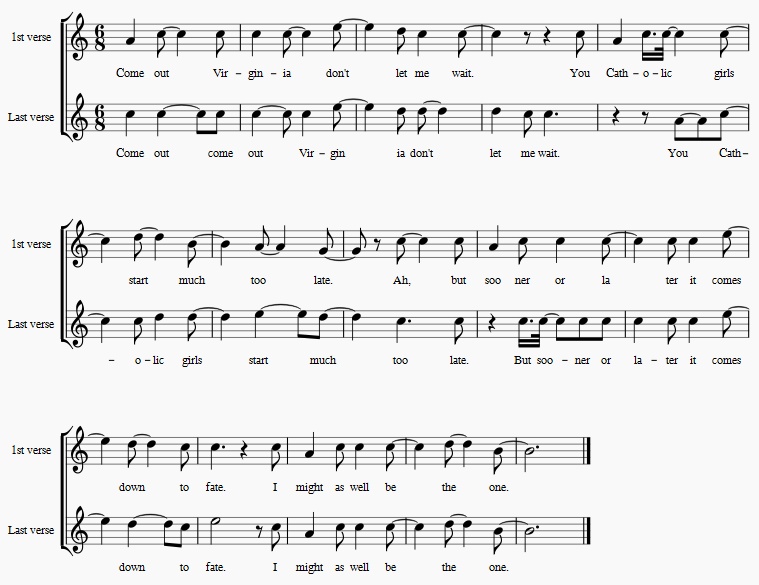 And once again, allow me to convince your ears. The first verse in the Billy Joel version:

IMO it's waaaay cool when the voices line up again on "comes down to fate".

Also if you're concerned this falls into the "random improv by the singer" category, note that Billy Joel does the same thing live:

Does this one pass the "cover test"? Hells yes it does... two notable covers (and by "notable", I mean "I had them in iTunes") both do the same shift in rhythm.

The first bridge in the Glee version:

If you're old-school and find Glee covers too polished, you may prefer the version by Me First and the Gimme Gimmes, who I'm hoping to devote an entire post to, because - giving away my thesis here - I think they represent the most complete, stripped-down-to-basic-chords-and-melody catalog of rock and roll era songwriting. But I'm not here to sing their praises (yet), I'm here to show you that they also shifted the downbeat in this song:

I know of only one example in all of the songwritingverse that keeps the melody in the same place relative to the downbeat and the phrase, but moves the chords around cyclically within the phrase from one verse to the next. It's pretty mind-blowing, especially if you listened to this song between eight and nine million times in middle school and never noticed.

Don't even tell me that doesn't blow your mind. If you can find another song that does that, I'd like to hear it. But you can't.

2 thoughts on “When One Melody Isn’t Enough”