…and by “it” I mean “spent a lot of time thinking about big changes in vocal rhythm from one verse to the next”.

I don’t know very much about writing a blog, but I know that if you let yourself go back and make changes to old posts, you’ll never write new posts. So, rule of thumb: unless someone calls to your attention that you went on a racist tirade in the middle of a post, leave it alone.

That said, a few weeks ago, I did a post about changes in vocal rhythm from one verse to the next. I thought I had adequately covered the subject, until this week, when I was listening to “Oops!…I Did It Again” (BECAUSE IT’S FANTASTIC THAT’S WHY):

…and I had to chase the rhythmic dragon one more time.

In the first and second choruses of this pop masterpiece (that’s right, I’m sticking with the theory that this song is awesome), the chorus comes in strong with “Oops I” on two solid downbeats, after a pretty quiet pre-chorus. So I’d say that those downbeats (“Oops I”) are central to the hook:

Admit it, I only gave you 24 seconds and it’s already stuck in your head, right?

Anyway, so far catchy but unremarkable. But after the breakdown where a dude apparently recovers the necklace from Titanic (which is only bizarre because the video takes place in space, so there’s some serious mixing of frame stories here), the third chorus comes in with the vocals shifted by a whole beat! As in “[bam] Oops I”:

Or if you’re inclined toward those circles and lines people used a long time ago before they invented guitar tab: 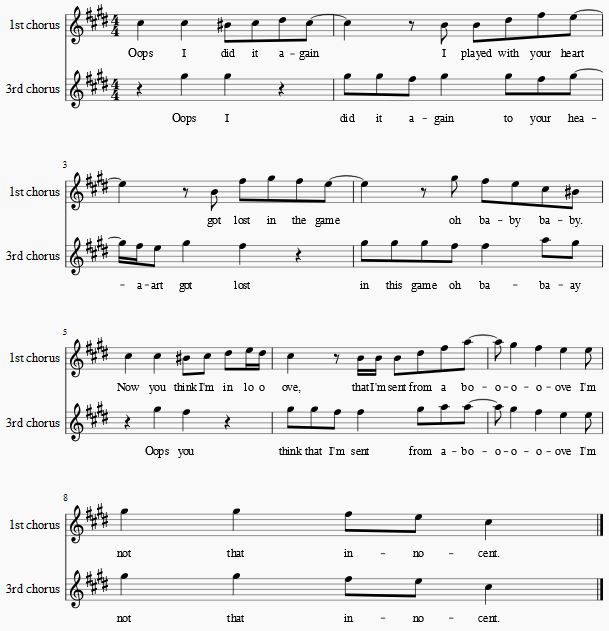 See it? Awesome, right?!?! One more cool thing, though… the last (fourth) chorus sits the two rhythms on top of each other:

Come up with another song where that happens (melody, distinct melody variation by itself, superposition). I dare you. I double-doctor-of-rock dare you.

Now you may recall that in my last post on this topic, I got on Tiffany’s case because she didn’t do the cool rhythmic variation in “I Think We’re Alone Now”. So I know what you’re wondering… the same thing I was wondering… when Glee inevitably covered “Oops!…”, did they do this cool variation too? Yes! Yes they did! In fact, I’d say they kicked up its prominence a little, so it’s sung by the lead voice:

Glee doesn’t often go mucking around with fundamental harmony, but while we’re spending a few thousand words on this song, it’s worth noting that the Glee version did some super-cool stuff with the verse… the Britney Spears version (in C#m, writing here in Am):

…and the Glee version (in Fm, writing here in Am):

That G#dim could really be an implied E7 that I’ve written as G#dim to make it look more interesting for to bolster my point, but either way, Go Glee.


Lastly, let’s talk about the other notable feature of this song: the most bizarre punctuation and whitespace ever to appear in a song title. I’m going to write it in a big font here so you can really ponder this for a moment:

Oops!…I Did It Again

Three things to note there, all of which are intentional:

The last item wouldn’t be remarkable except – hold on to your seats here – according to both Spotify and Wikipedia, the song title does not have a space between the ellipsis and “I”, but the album it appears on – also more or less called “Oops I Did it Again” does have a space. That’s right, the song is called:

Oops!…I Did It Again

…but the album is called:

Oops!… I Did It Again

There’s nothing I don’t like about that. Even without the album name oddity, in the “most interesting punctuation in a song title” category, this easily beats out punctuation lightweights like “Help!”, “Stop! In the Name of Love”, and “Don’t You (Forget About Me)”.